For the past three years or so, I (Eva) have been a member of the Steering Committee for the Royal Swedish Academy of Engineering Sciences project Research Outlook. Yesterday the project reached its conclusion. Minister for Higher Education and Research Helene Hellmark Knutsson and State Secretary Karin Röding were both present, along with many other people from the sector.

The project goals are described on the Academy’s website:

The goal for the project is to provide a forum in which horizons will be expanded to get an overview of goals, mechanisms, obstacles and opportunities in a number of prioritised research policy areas. Research Outlook will involve activities to generate new insights and will propose ways in which we can change the way Swedish research is financed and organised. In the longer term, the project aims to provide more opportunities for Swedish researchers to:

A number of reports have been written and seminars conducted. The reports include:

All these reports are available on the Royal Swedish Academy of Engineering Sciences website.

The concluding seminar yesterday was introduced by Minister for Higher Education and Research Helene Hellmark Knutsson. She began by saying that there is a general political consensus on research policy, albeit with certain nuances. She underlined the investments made by previous and present governments but stated that “the investments have not produced the desired results”. The outcome has been more research, but not higher quality, she said. She then went on to governance, which she called a pet issue, and referred to the upcoming inquiry, the terms of reference and chair of which will be presented on Thursday.  She also talked about internationalisation, and here too she adopted a sombre tone: we have lost ground in this area, our environments are not as international as they should be. But now this will be tackled by the inquiry chair who has been appointed, Agneta Bladh, part of whose remit is to develop goals and strategies by January 2018. At the end of her speech she mentioned pure research and the distribution of basic appropriations (granted directly by central government) relative to external funding, and said that this debate needs to continue. She said there did not need to be so sharp a dividing line between research funding bodies and higher education institutions. Finally she mentioned lifelong learning.

During the evening, three panels briskly dealt with three themes.

I participated in the third panel on internationalisation, along with Agneta Bladh and Sven Stafström (Swedish Research Council). The questions brought up were: Is a national strategy needed for the internationalisation of our higher education institutions? Yes or no? Why? What is the greatest challenge? Are conditions for internationalisation good in Sweden? What do you expect of the inquiry? 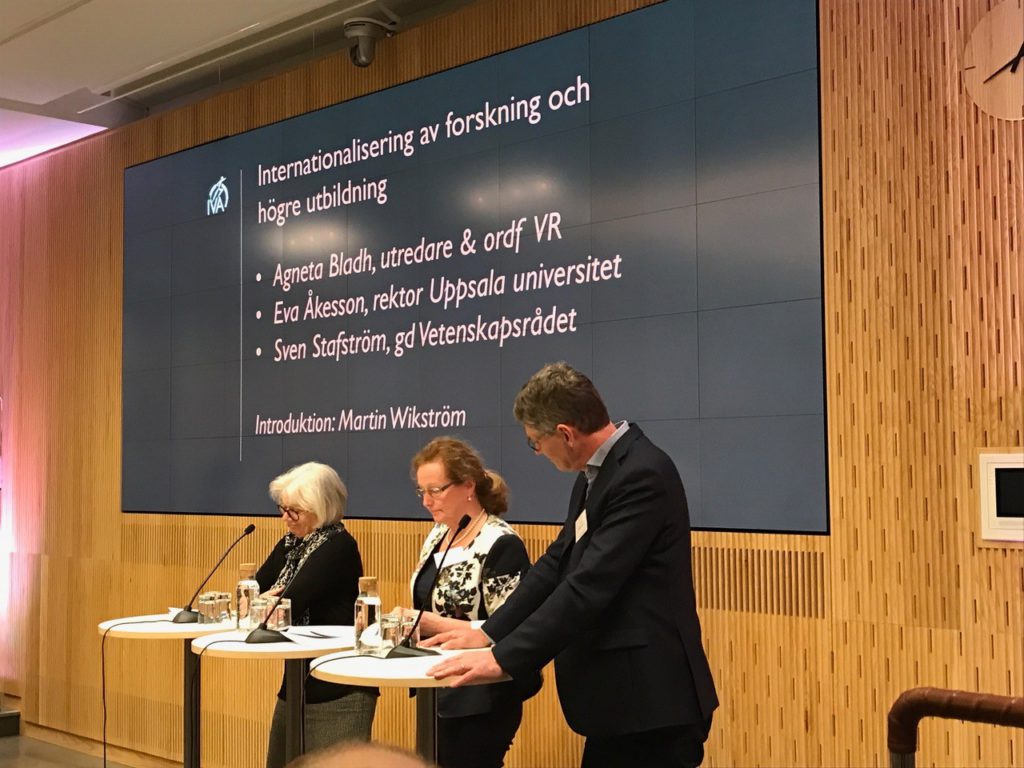 In my opinion, a national strategy is needed as long as it can be kept at the right level and does not reduce internationalisation to just counting numbers of incoming and outgoing students. In today’s increasingly globalised world, internationalisation is considerably more complex than that. When we attempt to collaborate across national borders, we struggle with regulations and the straitjacket of being a government agency. The Riksdag decision required for membership of the Guild is just one example of this. Research infrastructure is an area that has to be included in a national strategy. I hope the inquiry will clearly espouse the perspective of promotion and seek to eliminate obstacles, and that the strategy will be refreshingly free of political lectures.

The final report of the project highlighted the following five points:

The seminar was rounded off by State Secretary Karin Röding, who commented on the five points in the final report: