The third Excellence Seminar of the Swedish Academic Collaboration is now over, held in Shanghai this time. The previous two took place in Korea and Singapore, and more seminars are scheduled for spring 2016 in Brazil and Indonesia. Six Swedish universities are collaborating on these seminars in order to achieve greater visibility and impact than any one of us could accomplish individually. This project, which is supported by STINT, will naturally be evaluated after the fact. However, impressions so far seem favourable just from speaking with our own attending researchers. Themes this time around: Ageing society, Material science, Sustainable development, University management and Education.

We also found the time for a joint alumni event with Lund University in Shanghai, which was greatly appreciated, and drew many visitors from far away. 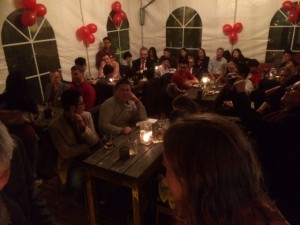 Now, we and our partners are considering the possibility of arranging something coordinated and more long-term in Japan. As any regular reader of this blog knows, Anders Malmberg took part in a Swedish delegation to Japan earlier this autumn and we in turn have received several large Japanese delegations in the last few years. IVA will embark on a RTM (Royal Technology Mission) to Japan this spring, which I and Professor Maria Strömme will participate in. I am pleased that we are collaborating more with other Swedish universities on the global stage.

International collaborations more important than ever

Last week came to a tragic end. The festivities surrounding the Inauguration of Professors and the banquet at Uppsala Castle were nearly over when news of the atrocious terrorist attacks in Paris reached us. Our thoughts go out to all those affected. Uppsala University has close ties to France and maintains student exchange programmes with several French universities. Yesterday, the University flew the flag at half mast, and last night, the dome of the Gustavianum was lit with the shades of the Tricolour in condemnation of the incident and in sympathy with France and the victims.

In times like these, the gravity of the University’s tasks are thrown into sharp relief—to educate, research and collaborate. To offer our knowledge in the fight against societal issues, for a better world. One of the tools in this fight is the international collaborations that Uppsala University engages in at every level of the University.

Yesterday, the U4 network came together in Uppsala. That is, Gröningen, Göttingen, Gent and Uppsala. We are four European universities with many similarities, who already enjoy fruitful collaboration in research and in other common issues such as academic leadership and internationalisation. Tonight, I (Eva) will travel to Shanghai to attend a seminar together with researchers from Uppsala University and representatives of five other Swedish universities as part of SACF, the Swedish Academic Collaboration Forum.