2017 – a stable year for Uppsala University

A few times a year, we as a university (and public authority) communicate formally with the government. One of these occasions is the annual report, when we report on how we have responded to the tasks given us in our appropriation directions, another is the budget documentation in which we present a forecast for the coming years along with the University’s considerations and budget requests. Both these documents are adopted by the University Board at its February meeting, which was held today.

The annual report summarises the past year in nearly 100 pages of text, tables and figures. A few samples of the contents:

Last year the University had 42,549 students. We admitted the first students to the preschool teacher education programme at Campus Gotland. A total of 5,391 students took degrees and are now moving on to jobs or further studies and research. More than 800 students came to Uppsala from non-EU countries and paid tuition fees. The new system of quality evaluations for educational programmes got off the ground, with ten of the University’s programmes conducting pilot evaluations.

Last year we also carried out Quality and Renewal 2017 (Q&R17) – a major review of all our research environments. The results are now being digested and acted on at all levels of the University. The University’s researchers published more than 6,000 articles and books. Uppsala University secured EUR 18 million from the EU’s research programme Horizon 2020. Since 2014, 57 of the University’s researchers have received prestigious grants from the European Research Council (ERC), and several researchers have won similarly prestigious Wallenberg Academy Fellows awards.

The rapid expansion of recent years continued, though at a more moderate pace. Turnover is approaching SEK 7 billion (an increase of SEK 800 million over the past five years), and the number of staff is approaching 7,000. However, in some areas developments are slower than we would like. The proportion of professors who are women is creeping up but is still too low, at 29 per cent.

In the budget documentation we look ahead. Some of the issues the University particularly highlights are the need for increased basic appropriations for research and higher (restored) compensation per student in educational programmes; the difficulties of finding enough practice placement opportunities in certain programmes; the need for a national scholarship fund for third country students; and of course the issue of guaranteeing universities’ autonomy and freedom of action, and the freedom of research and education.

Researcher and physician Ahmadreza Djalali has been sentenced to death by a court in Iran. When an academic and colleague is threatened in the course of their professional activities, the entire academic community is threatened. We therefore join Karolinska Institutet, the Association of Swedish Higher Education, Amnesty International and other organisations in demanding that the death sentence be quashed and that Ahmadreza Djalali be released immediately.

Dr Ahmadreza Djalali is affiliated with Karolinska Institutet and the University of Eastern Piedmont in Novara, Italy. His work focuses on improving the capacity of hospitals in countries affected by extreme poverty, armed conflicts and natural disasters. He completed a doctorate at Karolinska Institutet in 2012, is resident in Sweden and has a permanent residence permit in our country.

Along with many other higher education institutions and organisations, we protest against this treatment of a colleague and fellow human being. We want to show our support for Ahmadreza Djalali’s family, we condemn the death penalty in all circumstances and we demand that the government of Iran release our colleague promptly.

The Swedish Migration Agency is threatening to force fee-paying students who have too little money in their bank account to leave the country. The fact that they are getting on well with their studies and meeting their financial commitments to the University is irrelevant. This is completely inconsistent with the aspiration to increase the internationalisation of higher education and it damages Sweden’s reputation. The rules must be changed immediately; the changes in practice brought in at the end of January are not enough.

The government inquiry on internationalisation has just presented an interim report which proposes that “the Swedish Migration Agency should be instructed to consider, in consultation with higher education institutions, how procedures can be improved so as to simplify the processing of applications for residence permits for students, visiting researchers and other employees, and to shorten processing times” (SoU 2018/3).

This is important, but it is even more crucial that those who have received a residence permit and started their programme in Sweden are guaranteed the opportunity to complete their education. At Uppsala University we have had several cases when motivated students from the United States, South Korea and other countries have fallen foul of the regulations. It has just happened again. One of our students, who has been with us for one-and-a-half years, is to be sent home because she does not have enough money in her bank account. (The local paper wrote about the student’s situation on unt.se on 8 February 2018.) The rules say that students staying in Sweden on a student visa must have over SEK 80,000 per year available in their account. A student admitted to a two-year programme has to be able to demonstrate they have twice that amount. This in itself is an unreasonable demand. As a student one often lives with little margin, as many of us know from experience. Many students are financed by their parents, who can be relied on to send money every month but cannot always tie up large lump-sums. As many people are aware, students can also improve their financial situation by working on the side. In Uppsala, for example, many students have jobs at the student associations. That is the reality of student life.

The long processing times are another problem. A student who does not have a residence permit and is waiting for a decision can stay in the country but cannot do a degree project in another country. The bureaucracy gets in the way of their studies. A residence permit should therefore be granted for the whole of the programme applied for at once.

The Swedish Migration Agency’s inflexible rules are not just unnecessary, they are counter-productive. They are damaging for students, for internationalisation and, ultimately, for the development of higher education in Sweden. The exaggeratedly strict interpretation of the regulations is out of tune with reality. Change cannot wait. This issue is urgent.

Early on Thursday morning the Management Council defied the snow and set off for Brussels to combine this semester’s overnight conference with a study visit. A change of perspective provides inspiration for strategic discussions.

We had a packed programme, starting with an introduction to the Swedish government’s work in Brussels. At the Permanent Representation of Sweden to the European Union we met Ambassador Åsa Webber and Daniel Sjöberg, who works with Swedish MEP Cecilia Wikström (who was unfortunately unable to attend) at the European Parliament. Åsa, Daniel and Cecilia all happen to be Uppsala alumni. 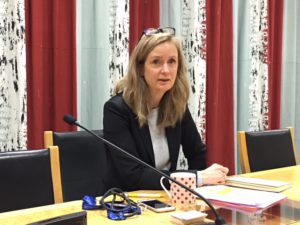 The European Commission led by Jean-Claude Juncker is coming to the end of its period in office. They are trying to follow up and highlight the issues the EU has been working on. Right now, the big issues for the future are Brexit, the negotiations ahead of the EU’s multiannual budget and the run-up to the elections to the European Parliament in May 2019.

Naturally, we wanted to focus on developments in the area of research and education. Negotiations are now in progress on the next framework programme, the seven-year research programme that will replace Horizon 2020 and is provisionally referred to as FP9 (Framework Programme 9), and on the future of Erasmus+. In many ways, Brussels is one great negotiating machine, which is now firing on all cylinders. Johannes Jarlebring, Uppsala University’s EU strategist, gave us a thorough briefing on how decisions are made in Brussels, and how we can get involved, provide input and influence decisions.

As you probably know, Uppsala University is a member of The Guild of European Research-Intensive Universities. In the afternoon we went on to the Guild Office. This is a kind of home office for us when in Brussels, so it’s both convenient and relaxing to be able to hold meetings there. 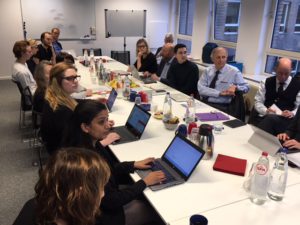 The Management Council meeting at the Guild Office

On Thursday afternoon we met Secretary-General Jan Palmowski, who talked about the most important issues on The Guild’s agenda. After that, Thomas Midtgaard, expert at the European Commission, talked about the Commission’s work on FP9 and President Macron’s call for European Universities. Dan Andree from Vinnova and Ana Beramendi from the Swedish Research Council told us about their work. Vinnova and the Swedish Research Council have a joint office in Brussels these days.

A busy day ended with further discussions over an enjoyable dinner.

On Friday morning we continued with a programme that had a greater focus on education issues, beginning with a talk by Thomas Jørgensen, policy officer at the European University Association (EUA), another network of which we are a member. What will happen to the Bologna Process in future? How will Erasmus+ develop? 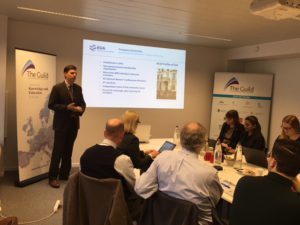 We also learned more about the European Research Council (ERC), one of the most successful and prestigious parts of the EU framework programme for research. Anna Lönnroth told us more about how it works and about plans for the future. The final guests in our programme were representatives of the Commission working with the European Institute of Innovation and Technology’s Knowledge Innovation Communities. Uppsala University is involved in three of them: InnoEnergy, Health and Raw Materials. They also talked about plans ahead of the new framework programme FP9.

We concluded with a regular Management Council meeting which also gave us a chance to sum up our impressions. How can we equip ourselves and prepare for the new research programme? What do we need to work on more at home? Can we benefit from experiences from the projects in which we have been involved? How do we conduct and use analyses? Should we draw up an EU strategy? Uppsala University is a member of several European networks: The Guild, EUA, Coimbra and U4. It’s important for us to be aware of how we can best use each of these networks.