Tomorrow, Saturday 22 April 2017, many will participate in worldwide demonstrations for science. In Uppsala we can join in the march starting at Stora Torget at 11:00 and proceeding via Gustavianum to the Ångström Laboratory. Many organisations support March for Science, including the Association of Swedish Higher Education and the Swedish Research Council.

I (Eva) will take part to show my support for science and to highlight my opposition to attempts to limit academic freedom. As we’ve written several times before in this blog: the best way to respond to the trends we are seeing today – political uncertainty, fact resistance and contempt for knowledge – is to strengthen the independence of the universities and defend critical thinking and the advancement of society on the basis of knowledge. 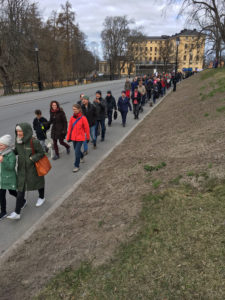 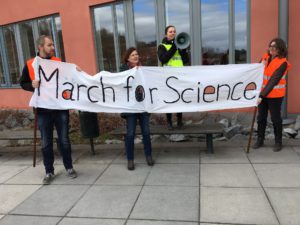 As a member of The Guild network, Uppsala University endorses the joint statement:

On 22 April 2017, The Guild will join people across the world to celebrate the collaborative and transnational spirit of science, and to condemn efforts to curtail academic freedom.

Science can and should be a source of our future, but it does not exist in a vacuum. Saturday’s march forms part of broader effort to secure science’s place in the public sphere where funding is determined, and legislation is discussed and adopted.

In Europe, the Commission and other institutions are creating funding mechanisms and flexible regulatory systems to promote Open Science and incentivise scientific cooperation throughout the Union. Yet, in recent months, we have witnessed worrying actions that threaten academic freedom; these include: Hungary’s latest higher education law, which in effect targets Central European University; and the imprisonment – without charges – of students, teachers and researchers in Turkey. We are alarmed by these developments.

We also raise our concerns in relation to other restrictions to academic freedom we have witnessed recently. These include threatened cuts to eliminate funding for the National Endowment for the Arts in the US, and restrictions on public discussion for employees of the Environmental Protection Agency and the Department of Agriculture in the US.

Globalisation, economic change and population movements have caused deep anxieties: these cannot continue to be addressed with platitudes or fake news. They require in-depth discussions about values, cultures and what it means to be secure: and they require greater efforts to ensure wider social participation. We call upon the governments of European states to enhance their commitment to research, innovation and research-led education.