Last week, we had a meeting of Uppsala University’s newly established International Advisory Board (IAB). This group consists of people with great experience of academia and university leadership who have agreed to come to Uppsala about once a year to give critical and constructive views on subjects and issues that we present. Those who participated in the meeting were Edward Byrne, President and Principal of King’s College London, Kjersti Fløttum, Professor at the University of Bergen, Meric Gertler, President of the University of Toronto, Helle Praetorius, Professor at Aarhus University and chair of one of the Q&R17 panels, and Tuula Teeri, former President of Aalto University and current President of the Royal Swedish Academy of Engineering Sciences (IVA). The sixth member of the IAB, Harlene Hayne, Vice-Chancellor of the University of Otago, was unable to attend on this occasion. 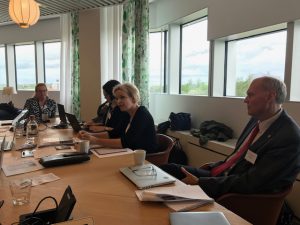 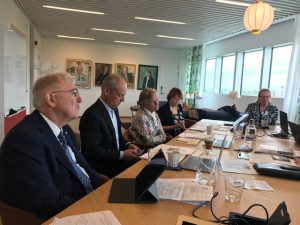 The focus was on three questions: the Q&R17 project and in particular how the University has taken on board and implemented its conclusions and recommendations, the ongoing revision of the University’s mission, goals and strategies statement, and the current joint application with the universities of Ghent, Groningen, Göttingen and Tartu to be selected as a European University Network pilot project.

The discussions were lively. The Q&R project and its follow-up received a positive response. The whole approach was regarded as innovative, bold and forward-looking and the measures we are taking were considered reasonable. With regard to the mission, goals and strategies statement, the feedback can be summed up as being that we ought to be able to raise our ambitions and should attempt to make the document sharper and shorter. The EUN initiative wound up in a general discussion about internationalisation strategies, the need to seek university partners that represent excellence and to avoid becoming too narrowly European in our cooperation.

Our work on university management and leadership also needs to be subjected to peer review. The value of discussing important issues with experienced ‘critical friends’ who see what we do with an outside perspective can hardly be overestimated.