Tomorrow Uppsala welcomes the arrival of spring, whatever the weather. It’s a tradition that has come to be a celebration for the whole city. This has been made possible, not least, by cooperation between the local authorities, the police, property owners, student associations, the University and many others. 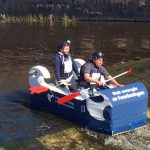 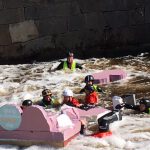 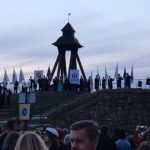 The last day of April is celebrated in Uppsala as nowhere else. We celebrate together, students, local residents, young and old, and many who travel to Uppsala just to be part of it.

We create our own traditions and add to them. The running of the falls began in 1975 at the initiative of students Anders Ahnesjö and Carl-Johan Hansson. The event has been developed into a week-long festival by the Uppsala Union of Engineering and Science Students. The running of the falls itself starts at 10:00. This year, 120 rafts will set off on the adventurous course down the River Fyris. I won’t be riding the river this time. However, I will have the honour of choosing the most spectacular raft.

People will be partaking of a traditional herring lunch all over the city. Many will do so in Ekonomikum Park, others on Castle Hill. As for me, I will be eating my herring at Uppsala Konsert & Kongress. I always enjoy that.

One of the highlights of the year, for me, is raising my student cap at precisely 15:00 and welcoming the arrival of spring from the balcony of Carolina Rediviva Library. This tradition was launched by one of my predecessors, Torgny Segerstedt, in the 1950s, and it’s magical to gaze out over the masses gathered below and see all the waving caps. These days we can also look forward to listening to the great Uppsala choir Orphei Drängar (OD) singing on the steps of the library. This concert is a relatively new tradition, which began when we closed the University Main Building for renovation. (Now it’s Carolina that has been through a major renovation. Anyone who visits our fantastic library building on 2 May will be able to see the result.) After that, it will be time to change for Allmänna Sången choir’s annual Walpurgis ball at Uppsala Castle. At about nine in the evening, we will go out to listen to spring songs and the traditional speech at the Gunilla Bell, before ending the evening at the county governor’s.

I encourage you all to to have a really good time, but don’t forget to drink responsibly (make every second drink water). Look after yourselves and each other. And pick up the litter.

I hope you all have a wonderful day. Thank you, all of you who make the last day of April such a great party!