University Board meeting on Gotland

Once a semester, the University Board meets for an extended overnight conference with study visits and strategic discussions. This time we were on Gotland. After the flight to Visby, the bus ride across Gotland, and a windy and chilly ferry crossing to the island of Fårö, we were met by Kerstin Kalström with coffee and home-baked buns at Hammars, Ingmar Bergman’s home on Fårö. Bergman’s home is now managed by the Bergman Estate on Fårö Foundation, which enables artists, authors and film-makers to spend time there. Since Uppsala University is involved in the Foundation, our researchers also have this opportunity, which many are keen to make use of. We continued with a visit to Bergmancenter, which has exhibitions illustrating Bergman’s role as film-maker, author and Fårö resident. 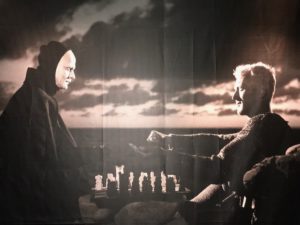 After lunch we moved on to Campus Gotland, where Adviser to the Vice-Chancellor Olle Jansson and Deputy University Director Therese Iveby Gardell presented the University’s activities on Gotland. They gave us both a historical retrospect on the merger and its rationale, and a future outlook with plans for the next five years. Campus Gotland is five years old in July and is a real success story. Sometimes it’s useful to be reminded about all we have achieved and that it is still a work in progress.

In the evening, County Governor Cecilia Schelin Seidegård hosted us at the Residence. She is a great supporter of Uppsala University and Campus Gotland and has contributed to Campus Gotland’s success and to good cooperation in the region. It was an enjoyable dinner.

On the second day, we had an ordinary University Board meeting. As always, the meeting began with a Vice-Chancellor’s report, which is an update on what is going on at the University and what has happened since the previous meeting.

Many of the speakers at the meeting took part via a link from Uppsala. This was a very hands-on way of showing how we are working on travel-free meetings and communications between Uppsala and Gotland. It all went smoothly.

Much of the morning session was devoted to auditing and our internal audit. Margaretha Edman Bojeus from the Swedish National Audit Office and our own Director of Finance Claes Nilsson went through the National Audit Office’s report. Internal auditing is the University’s tool for ensuring that the University follows rules, guidelines and procedures, and works systematically to achieve its objectives. Internal Auditor Sven Jungerhem participated via a link from Uppsala. Internal Audit has analysed the situation of heads of department and directors. This analysis will serve as useful input in the review of the role of head of department that the Vice-Chancellor has decided to conduct. Internal Audit also told us about an audit of the University’s operational planning. It shows that the process works well on the whole.

Uppsala University’s Mission and Core Values are given specific form and substance in various programmes and action plans. At this meeting, we had a follow-up of the programmes for external collaboration and equal opportunities. The Vice-Chancellor was also instructed by the University Board to revise the Mission and Core Values and see whether it is possible to find a structure in which the various thematic programmes can be integrated. The instructions call for the revised proposal to be ready for adoption in December 2019.

The final point on the agenda was a preparatory discussion and progress report on the operational plan for 2019–2021. The University Board is due to decide on the plan at its meeting in June. Daniel Gillberg introduced a thorough follow-up of education, research and collaboration based on the Mission and Core Values. It ranged from the publication of research findings and changes in the number of fee-paying students to the number of students taking freestanding courses, the number of doctoral students and progress in the initiatives concerning assistant senior lecturers and gender equality. This was followed by a discussion of fundamental factors and key issues in this year’s operational planning process.  By way of conclusion, the University Board also received a short report from the working group on the University’s rules of procedure. 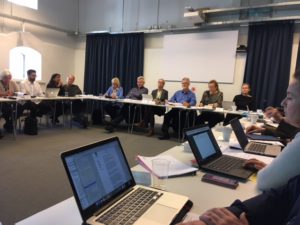