University Board meeting at SCAS

Uppsala University has a new University Board, which took office on 1 May. Today we had our first meeting in the Thunberg Lecture Hall at the Swedish Collegium for Advanced Study (SCAS) in the Botanical Garden, lovely in its early summer beauty.

The new members were given a crash course on Uppsala University and the role and responsibilities of the University Board, ranging from the Higher Education Act and Ordinance to internal audit and a presentation of the students’ unions. So then they were well set to tackle the day’s business. Before the meeting, Björn Wittrock gave a brief presentation on SCAS and the beautiful room in which we were sitting. After that, the new chair of the University Board, Gudmund Hernes, opened the meeting. He was formerly minister for education and minister for health in Norway and told us about his earliest encounters with Uppsala University, dating all the way back to 1948. He also gave brief reflections on the role of universities in society, the challenges we face as a university and the responsibilities of the University Board. The new external members are Dr Henrik Berggren, historian and writer, Sylvia Schwaag Serger from the Swedish Agency for Innovation Systems (Vinnova), Ulla Achrén from Åbo Akademi University and Elisabeth Dahlin from the Red Cross.  The new faculty representatives are Shirin Ahlbäck Öberg, Roland Roberts and Lisa Ekselius. The students are represented by Caisa Lycken, Jakob Ekengard, Adam Sabir and the alternates Fredrik Hultman and Emelie De Geer. Members of the ‘old’ Board who are continuing are external members Johan Wall, Gunnar Svedberg and Uli Hacksell, and faculty representative Sven Widmalm. It’s good to have a mix of continuity and renewal.

As usual, I began by giving the Vice-Chancellor’s report for June (Swedish) on recent developments at the University. You can read the report here (in Swedish). The meeting today also included some formal decisions, such as appointing members of the Council of Trustees and the audit committee, and appointing a vice-chair of the Board. Gunnar Svedberg will continue as vice-chair until 31 December 2017. 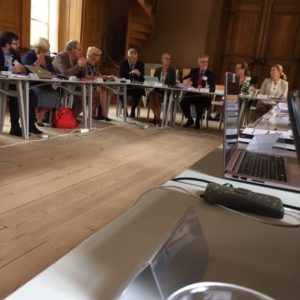 The Adviser to the Vice-Chancellor on Internationalisation, Leif Kirsebom, presented a follow-up report on the programme for internationalisation. The University Board noted that the University is on the right track. We had a good discussion which we will have reason to take up again on many future occasions. At the June meeting, the operational plan is adopted and the focus remains on quality and skills supply. For the first time, the operational plan has a three-year perspective, covering 2018–2020. This enables the disciplinary domains and departments to make long-term plans. Read more in the press release.

Last year, Uppsala University adopted new procedures for handling alleged misconduct in research. Ethical issues, the integrity of research, and misconduct are issues that affect confidence in the University and in science. Erik Lempert chairs the University’s Board for investigation of misconduct in research. He talked about how such allegations are handled at Uppsala University. The University Board also approved a reorganisation of the Uppsala Centre for Russian and Eurasian Studies, establishing a Department of Russian and Eurasian Studies. We also had a short visit from County Governor Göran Enander, who presented himself and the programme Forskarna på slottet (Researchers at the Castle).

The meeting proper ended with the chair thanking our students for the time and effort they have devoted to the University Board. The day continued with a tour of the University on which the Board met our three vice-rectors and saw some of the University’s campus areas – the English Park Campus, SciLifeLab/Navet at Uppsala Biomedical Centre and finally the Ångström Laboratory. We have a committed and competent Board with an important role, which they take seriously, and I look forward with confidence to our continued good cooperation in the autumn. 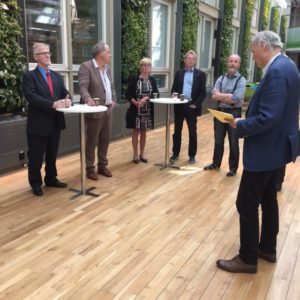