Alumni – our best ambassadors and friends

Uppsala University has thousands of alumni all over Sweden and around the world. Hundreds of thousands, even. Anyone who has ever studied or worked at the University, all our exchange students, honorary doctors and visiting researchers – all are welcome in our  alumni family. So it goes without saying that we want to take the opportunity to meet as many of our alumni as possible when we are out travelling.

Every evening, after university visits and meetings, we have met alumni and other friends of our University. In Los Angeles we met at a gastropub. Kristina Edström gave a presentation on super batteries. One of the people we met was a former student who had studied wind power design at Campus Gotland and now works in business development at a company that designs wind power farms all over the world. We also met several people who had been undergraduates or PhD students at our University and are now at UCLA, Caltech and California State University. 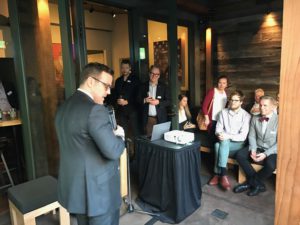 Jennings Segura from the Swedish–American Chamber of Commerce in Los Angeles (SACC LA) welcomes us to LA. Jennings grew up in New Orleans and first came to Uppsala as an exchange student and returned to read economics. 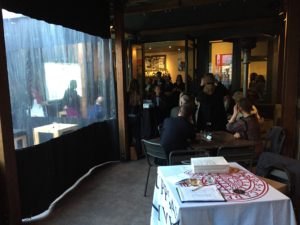 Kristina Edström talks on the subject “When Will the Super Battery Be a Reality?”

We have a very active alumni chapter in the San Francisco Bay Area. The Chapter’s president, Lars E. Johansson, a partner at K&L Gates, was our host on Tuesday evening when the topic was citizenship.

The Uppsala Lawyers’ Alumni Foundation took the opportunity to establish their own foreign chapter in the Bay Area. A question discussed at the meeting was ways in which alumni with law degrees from Uppsala University can help the Faculty of Law, for example by giving guest lectures via video link. 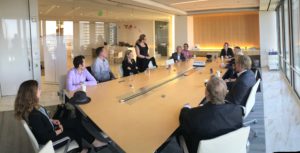 Participants at the meeting included Mattias Dalberg, Dean of the Faculty of Law, and Magnus Ödman, Deputy Administrative Director at the Office for Humanities and Social Sciences. 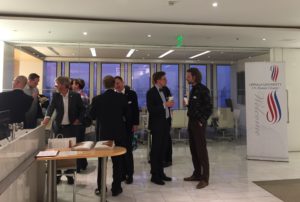 There were many discussions on Swedishness, identity and belonging at the mingle that followed.

Yesterday, after the delegation’s visit to Stanford University had ended, we walked to Palo Alto and Nordic Innovation House, where the topic for the evening, quite appropriately, was innovation.  Innovation – The Love-child of Structure and Serendipity? 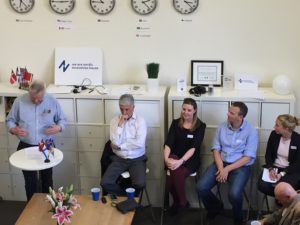 During the pizza mingle that followed, we met several alumni who work in Silicon Valley, both at start-ups and big companies like Google and Facebook.  One of the alumni who came to the event was Franz Mayrhofer. Franz studied in Uppsala in 1967 – a genuine jubilee alumnus, so to speak. 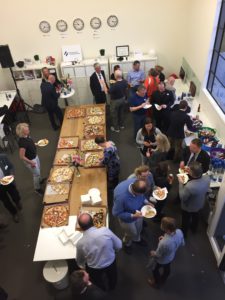 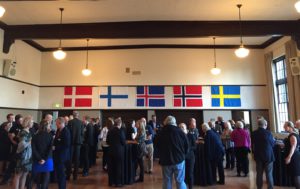 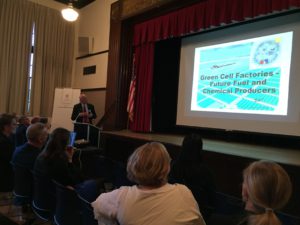 The atmosphere was relaxed with plenty of laughs and a lively mingle afterwards. Some of the participants are now at the University of Washington or work at big companies in the rapidly growing tech industry in Seattle. Perhaps the seed was sown for the next US alumni chapter, since some of the participants were interested in starting their own chapter here. 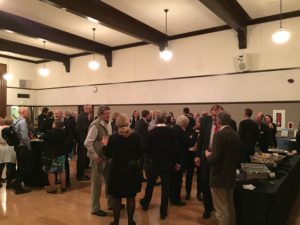 Uppsala University’s alumni network is naturally very useful to alumni themselves: it gives them access to contacts all over the world, a means of broadening their career networks and obtaining good advice.

But they are at least as valuable a resource for us at Uppsala University. Besides being good ambassadors and spreading the University’s knowledge and values throughout the world, alumni can serve as advisors on committees and inquiries or give guest lectures to our students and help with placements and independent projects. When we travel we can contact our alumni and foreign chapters for advice and introductions to companies and universities. Many alumni remember their time at Uppsala University with gratitude and are keen to do something for us in return, and to contribute to our goal of disseminating knowledge for the benefit of humankind and for a better world.