Today our enlarged Management Council received a visit from two people from the Swedish Secretariat for Gender Research at the University of Gothenburg, which has been commissioned to support higher education institutions in their work on gender mainstreaming. This was included in the University’s appropriation directions for 2016. The government singles out certain areas as particular priorities: unequal academic career opportunities, the need to counter gender-related study choices and the need to improve student completion rates for women and men.

As part of this work we have studied gender equality measures at the University that were decided at a central level and implemented between 2004 and 2015. Gender equality efforts have often been conducted in project form. In the course of these projects, problem areas have been identified and measures carried out. The list makes impressive reading. My conclusion is that Uppsala University has worked intensively for a long time to promote gender equality and equal treatment. In general, Uppsala University has met the government’s targets for the percentage of women among newly appointed professors (in the latest period, 2012–2015, this was 36%). I am convinced that the initiatives carried out by the University, such as our ‘Kraftpaket för jämställdhet’ (‘Package for gender equality’), have contributed to this, as does the fact that the management at various levels emphasises the importance of continuous and systematic work on gender equality and equal treatment. The next stage is a catalogue of problems, which will soon be completed.

The University is required to produce an action plan for gender mainstreaming, and I have appointed a working group and a reference group for this purpose. The working group includes Anna T. Höglund, Adviser to the Vice-Chancellor on Equal Treatment, Ann-Sofie Wigg Bodin, equal treatment specialist at the Human Resources Division, and Tom Petersson, analyst at the Planning Division. The student unions have also nominated a member of the working group. Anna T. Höglund has been appointed chair and Tom Petersson secretary of the working group. The Equal Treatment Council serves as a reference group for the working group, which makes regular progress reports to the Vice-Chancellor’s Management Council. The action plan is scheduled to be circulated for comments in early January 2017 and to be finalised and submitted to the Ministry by 25 May 2017. It is important to bear in mind the advice we received – it is better to select a few areas and do them well than to make extensive plans that come to nothing. If you have any opinions or suggestions, please contact the working group or a representative of the Equal Treatment Council.

Here are a few pictures from the day’s proceedings in the enlarged Management Council: 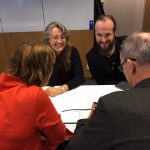 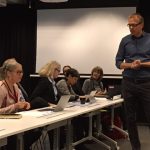 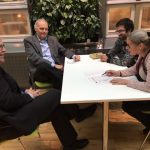 “is the (re)organisation, improvement, development and evaluation of policy processes, so that a gender equality perspective is incorporated in all policies at all levels and at all stages, by the actors normally involved in policy-making.”

Concretely, gender mainstreaming can involve development of management systems and core activities so that they promote gender equality and a fair distribution of resources; routines and processes that do not discriminate any person based on sex/gender; and educational opportunities that are equally available to everybody regardless of sex/gender and other power regimes.