Today a seminar was held for vice-chancellors and chairs of the boards of higher education institutions in Sweden. I participated along with the deputy chair of the University Board, Gunnar Svedberg.

Minister for Higher Education and Research Helene Hellmark Knutsson started proceedings with a presentation of the government’s Budget Bill for 2017. Previous ministers have invited us vice-chancellors for an advance briefing a week or so before the Budget Bill was made public, but this time the Minister chose to do so after the event. Much is already known, but it’s still interesting to hear the Minister present the information in a single package. I will attempt to summarise some impressions below. 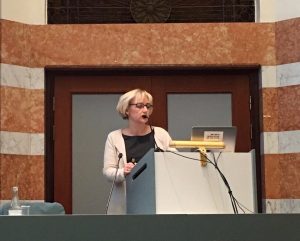 To begin with, the Minister gave a positive picture of the situation in Sweden. Lower youth unemployment, combined with smaller youth cohorts, has reduced the pressure of applications at certain higher education institutions. Education and research enjoy a strong position in Sweden – central government allocates SEK 67 billion, which corresponds to 1.7% of GDP, a high figure compared with other OECD countries. If student finance is included, the total is SEK 77 billion. There are 400,000 students in Sweden, 68,000 degrees are awarded per year and the general level of education is rising. According to the Minister, education pays off: a high proportion of people with post-secondary education obtain regular employment. Ms Knutsson also noted that an increasing number of PhD students hold paid positions from the very start of their doctoral education (now 66%).

The initiatives in the Budget Bill come chiefly in the area of teacher education. Naturally we are happy that Uppsala University is entrusted with responsibility for part of the expansion planned in the coming years.

Increased basic appropriations for research have long been promised. This promise was made as long as two years ago in the annual Statement of Government Policy. Unfortunately there will be no increase in 2017, but the basic appropriations will gradually increase in 2018–2020, by a total of SEK 1.3 billion. The Minister hopes this will contribute to an increase in the number of young researchers and generate new research, not just bolster existing rersearch. The research bill will contain increases totalling SEK 2.8 billion in the years up to 2020. Most of this will go to Vinnova (the Swedish innovation agency), Formas (the Swedish Research Council for Environment, Agricultural Sciences and Spatial Planning), the Swedish Research Council, Forte (the Swedish Research Council for Health, Working Life and Welfare), and RISE Research Institutes of Sweden. Along with many others, we have emphasised the need for increased basic appropriations and explained that the high proportion of external funding of research in Sweden makes it difficult for higher education institutions to ensure attractive career paths and manage infrastructure issues responsibly. In this respect, the coming Budget Bill is a disappointment. The proportion of external research funding will not decrease; instead, it will increase. If you also take into account the fact that certain providers of funds require a high proportion of co-financing, that Akademiska Hus wants to charge higher rents, and that price and salary indexing regularly fails to keep pace with real cost increases – then not much is left of the increase in basic appropriations.

The Minister also emphasised there would be more stringent follow-up and evaluation and that she wants to see increased gender equality, increased external collaboration, attractive career paths (increased predictability) and increased mobility, as well as a closer link between research and education. Teacher education will be subject to special follow-up. Asked directly about FOKUS (the Swedish Research Council’s proposal on national evaluation of research), the Minister replied: The Swedish Research Council is not to go any further with this concept, the higher education institutions are to continue to conduct their own evaluations so as to be able to make their own choices. Possibly some thematic evaluation may be carried out at some future time, but the higher education institutions themselves are to conduct the important evaluation. Of course this is exactly what Uppsala University is doing in our Q&R17!

Three subjects were discussed under the heading “Looking ahead”:

The rest of the seminar was devoted to board and head of agency, our respective roles were pointed out, the importance of evaluating the work of the board was stressed. Ms Knutsson told us that particular emphasis would be given to “issues of order and orderliness” and that the board is responsible for ensuring that the university complies with legal regulations. These sorts of questions will be taken up more clearly in future annual ministry–university dialogues. We also had a presentation on the procedure for selecting external members now that the current boards’ term is due to expire in April 2017.