Last week was eventful. The public debate was dominated by intense reporting on the Macchiarini affair. Reports have now come in from three out of thirteen investigations. Many lessons need to be learned, much needs to be discussed. We haven’t seen the end of this story yet.

But so many other things happened as well.

The week began with ABB’s centenary celebrations in Västerås. ABB became one of Uppsala University’s strategic partners about a year ago now. These days it’s a global company, but it remains an important part of Swedish industrial history with a tradition of innovation and new ideas. ABB is a future employer for many of our students and we have research cooperation in several areas, mostly in engineering and technology, though we also discussing other fields. 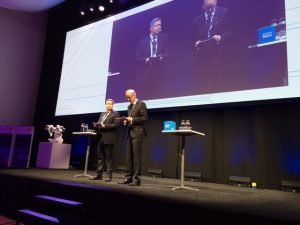 This week I also had the pleasure of welcoming around 150 delegates to Uppsala and the SANORD Conference. Academic leaders from a total of 44 universities in southern Africa and the Nordic countries gathering to discuss common issues. The organisation was founded in 2007, former Deputy Vice-Chancellor Kerstin Sahlin played a major role in its formation. The theme of this sixth conference, which lasted for three days, was Beyond Public Management. One of our alumni, now President of Mauritius, gave the opening address, followed by Kerstin Sahlin. I have the honour of chairing SANORD during the coming two-year period. We in Uppsala have reason to feel satisfied and pleased to have hosted a good event.

On Friday the Government announced a Research initiative on major challenges for society. The areas of priority are health and life sciences, the challenge of climate change, digitalisation and building a sustainable society. Themes that very much match Uppsala University’s priority areas. Between 2017 and 2020, the appropriations for this initiative will gradually increase to SEK 680 million. The funds will be subject to competition and will be distributed by the Swedish Research Council, Formas (the Swedish Research Council for Environment, Agricultural Sciences and Spatial Planning), Forte (the Swedish Research Council for Health, Working Life and Welfare) and the Swedish National Space Board. Needless to say, increased appropriations are pleasing, but it’s difficult to assess the whole package yet. The Government is presenting its proposals little by little. More information is expected in the Budget Bill on 20 September and further clarification will come in the Research Bill.

On Saturday the whole city opened up in glorious late summer weather for Uppsala’s annual Culture Night. A plethora of activities from early morning till late at night. And we opened the University’s doors too. There’s so much going on you want to be in several places at once. One of the highlights this year is the comic strip exhibition KABOOM!! at the University Library, Carolina Rediviva. An exciting and surprising exhibition has been put together, drawing on the Library’s ample collections. There, you  and I can learn loads about the history of comic strips, modern comic strips and the Uppsala connection. I’m particularly pleased that this is a joint project between the Department of Literature and the University Library. Did you know that the Phantom – the ‘Ghost who Walks’ – has been in Uppsala twice? His last visit was during the Linnaeus jubilee in 2008. The exhibition is on until 4 January, don’t miss it!

Another recurring highlight of Culture Night is awarding the Disa Prize at Studentbokhandeln. This year’s prizewinner – the sixteenth – is Professor of Astronomy Bengt Gustafsson. He wins the prize for his book Svarta hål (Black Holes). I can really recommend it, it stimulates your curiosity, it’s exciting, it gives you new perspectives and new knowledge. In accordance with tradition, he then gave a lecture at Museum Gustavianum. If you missed the lecture – read the book. The prize was established by my predecessor Bo Sundqvist at the initiative of former Chief Librarian Thomas Tottie. Both of them were present in the crowd at the bookshop. The aim of the prize is to honour and encourage popular science writing. And to make the world more understandable. 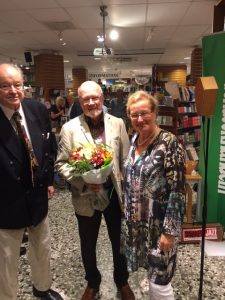