At a meeting in Brussels on 1 June, eight European universities signed a document forming an important new university network in Europe: The Guild of European Research-Intensive Universities. The founding universities are Glasgow and Warwick (UK), Tübingen and Göttingen (Germany), Bologna (Italy), Oslo (Norway), Groningen (the Netherlands), and Jagiellonian (Poland). 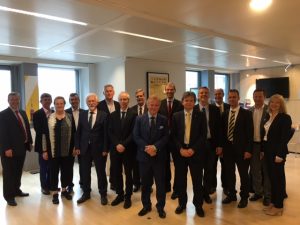 The Guild was founded with the aim of providing European research universities with a stronger voice in Brussels, but also of increasing the visibility of important research with the potential to inform European policy, as well as through benchmarking and collaborations developing the member universities’ management functions and innovation support, among other things. In addition, negotiations are in progress with another group of highly ranked European universities, with the aim of having the network encompass some 20 universities within a year. Read more about the Guild here.

Uppsala is meant to be the ninth founding member, but was unable to sign due to the fact that a Swedish university, as a government agency, is unable to join a ‘non-profit organization under Belgian Law’ without an official decision from the Swedish parliament, which normally takes up to six months. This weakens Uppsala’s prospects of helping to shape important initiatives like this one, and clearly underlines the need for increased institutional autonomy and freedom of action to be afforded to Swedish universities in one way or another. We now hope the parliament comes to a quick decision this autumn, so that we are able to participate fully when the network launches this November. 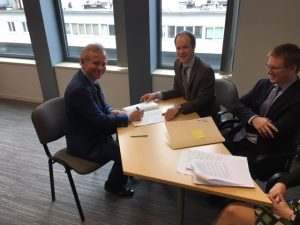 This image shows a pleased Ole Petter Otteerson, Vice-Chancellor of Oslo University and recently appointed chair of the network board, signing the document.