Spring is in the air

The countdown for 30 April has begun, and the clock has been set up by Carolina Rediviva. These last days of April are truly brimming with activity. 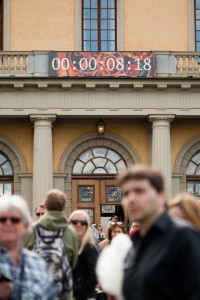 Last Monday, the admission statistics for the autumn were announced. Uppsala University has the largest number of applicants out of all Swedish seats of learning, even if the total amount has decreased slightly. That is mostly an artefact of smaller batches of students and a strong labour market. We hope to admit more students and open our courses to more applicants in the future. That is how we wish to contribute to life-long learning.

Last Tuesday, we made several important decisions. Antibiotic resistance is one of the major global healthcare challenges of today, and the University formally established its new Antibiotics Centre. In addition, an implementation decision was made for the reconstruction of Carolina Rediviva’s entrance. It achieves our ideals of an open, accessible university library, a new meeting place, and an asset for both the University and the city. Work is set to begin in autumn 2016, and I hope both the Segerstedt Building and the renovated University Main Building will be completed by then.

The spring sun was shining as the Uppsala University Consistory (the University Board) gathered at the Krusenberg Manor around lunchtime last Wednesday. The April meeting provides an opportunity to discuss more strategic future issues at the University. This time, we begun by addressing the digital revolution taking place within education and research. Input for the discussion of ongoing affairs in the outside world, but also within the University, was provided by chief librarian Lars Burman, David Blanck-Schaffer from the Department of Information Technology, and Mats Cullhed, who works with pedagogical development. The digital development affects everything from publication patterns and Open Access to pedagogical development and education forms. It is also plays a large role in the sort of environment we are able to offer, and how we will be able to compete about both students and researchers in the future.

The second major future issue discussed on Wednesday was the dimensioning of PhD studies programmes. There is a trend of downsizing all throughout Sweden, and we are no exception. The vice-rectors Torsten Svensson, Johan Tysk, and Stellan Sandler presented the general tendencies of each Disciplinary Domain. Sara Andersson, PhD and board member, also described a day in the life of a PhD student. What is the optimal ratio between post-docs and PhD students? What happens to teaching if the number of PhDs decreases?

Thursday saw the more formal part of the Consistory play out. It began as usual, with a Vice-Chancellor report where I presented current issues, both updates since last time around and upcoming events.

The Internal Audit has a mandate directly from the Consistory, and chief internal auditor Gunilla Liljeroth gave an annual report for the auditing work carried out in 2015. Last year was spent particularly analysing the plan for equal opportunity, facility assets, and IT infrastructure. They noted that good work is being done within the University, but also that follow-ups are sometimes lacking. Even so, the Consistory could conclude that the internal management and control generally works well.

The Student Health Centre is an important part of the University, and provides a valuable and appreciated service. Pursuant to the Higher Education Act, the University is responsible for providing students with healthcare. At Uppsala, the organisational form has been different than that of other seats of learning. For this reason, the University is establishing a healthcare centre for students as a unit of the Student Division and offering the Board of the Student Health Centre a period of transition starting 1 July. Our aim is to create a holistic solution and also to offer students preventative exercise alternatives. To that end, we have applied for government funding – we await the answer. It is important that students continue to be involved to a large extent in the running of the services, which was emphasized by the Consistory as part of the decision.

The Programme for Equal Opportunities, on the other hand, had its first round of discussion. The Adviser to the Vice-Chancellor Anna HögLund and Mikael Landsten from the Human Resources Division presented a draft for revision. Particularly emphasised issues were the relationship to the government’s demands for a plan for gender mainstreaming, and the importance of including the Equal Opportunities perspective in Q&R17.

Thursday’s meeting continued with a discussion of the University’s research strategies, ’Preparation for the unexpected’, which was presented by Kristina Edström and Margaretha Andersson. With our breadth and depth, Uppsala University can rapidly deal with contemporary societal issues. Which is an asset not only to our University, but also to society as a whole. Finally, Henrik Pompeiius was brought in to talk about his evaluation. He has been tasked with drafting proposed ways to raise our level of ambition in fundraising and alumni relations, and consolidating our efforts in external relations.

After the meeting, the Deputy Vice-Chancellor hosted an international delegation from Vietnam, and another from Gothenburg. For my own part, I went on to participate in an academic ceremony at Gävle University College. 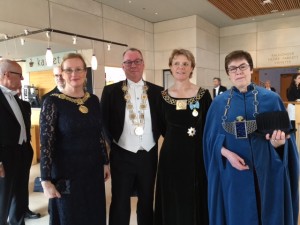 The week came to an end of sorts with a government dialogue at the Ministry of Education and Research. Such a dialogue is held every year at this time. There, we addressed the challenges facing the University, and ways of strengthening Sweden as a knowledge nation. The basis for the budget which we submitted earlier this spring formed the groundwork for our conversation, but also our input on the upcoming research proposition, due in late October this year. They were also interested in our efforts to assist newly arrived refugees and increase social inclusion, and questions on how to manage fraudulence were also brought up.

The day was topped off with festivities for our Gustafsson awardees. Congratulations Andreas Hellander, Tove Fall, Jens Carlsson, and Haining Tian! 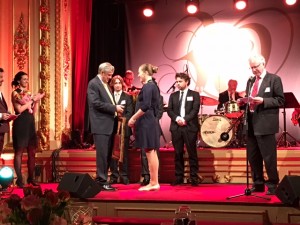 Yet the week was still not complete. Deputy Vice-Chancellor Anders Malmberg spent the weekend in Brussels to discuss our participation in a new European network.