There are many admirable initiatives taken by universities in various parts of the world. One of these is the UN Global Colloquium of University Presidents. It is a series of thematic meetings alternately hosted by the universities of Brown, Princeton, Columbia, Pennsylvania, Yale, and New York, and they gather Vice-Chancellors and special experts for workshops and dialogue. This year’s theme was the preservation of cultural heritage, and hosting the meeting this year was Yale University. I was invited along with Tor Broström from Uppsala University. We enjoyed a few intense days in the US together with colleagues from 28 universities from various parts of the world. The proceedings were opened by the UN Secretary-General Ban Ki-Moon. He gave a passionate and frank speech, where he emphasised the role and responsibility of the universities in preserving cultural heritages, but also in many other important issues for the days ahead. The challenges are complex and recurring. I found the meeting rewarding and instructive, questions of cultural heritage and the preservation thereof have clearly taken centre stage after the events of Syria and Mali. In the final session, we agreed to found an open network for universities and organisations that are interested in deep collaboration on this issue. The engagement was great, and I came away impressed with how much is already being done. We can truly learn a lot from each other. On twitter: #unite4heritage 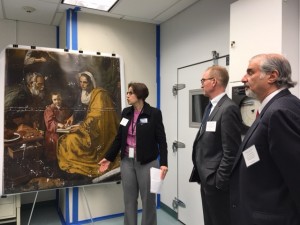 After traveling so far to get there, we were fortunately also able to meet with some of the driving forces behind our New York Alumni Chapter, and friends of UU. It is always inspiring to hear about people taking an active interest in our University despite not having studied there for many years. So to anyone who is about to graduate, or is leaving us after an exchange semester, do not forget to register as an alumnus and try to keep in touch with us and other alumni, wherever you may roam in the future. 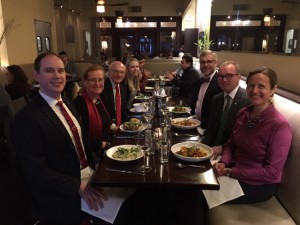 Back home, we had our work cut out for us plotting the overall course of the University for 2017. The preceding week, we had held our domain dialogues with the three Disciplinary Domains, and the following Monday, the University Management debated certain questions concerning Campus Gotland. As part of Haikola’s evaluation this autumn, and the 17 recommendations and proposals we received, these questions are particularly emphasised this spring. The Planning Council for Campus Gotland has had its mission to deliver recommendations to the Vice-Chancellor for the Consistory’s decision on the operational plan this June made clearer. We will be holding meetings with UUI, libraries, and students on the plan. This week, we have a seminar with the Consistory, an IVA workshop on financing, a dialogue meeting at the Department. In between, I have a soccer game, Gävle University’s academic ceremony, and an award ceremony with the Göran Gustavsson Foundation. Full speed ahead is one way to put it, being Vice-Chancellor of Uppsala University is both fun and varied!