Scholars At Risk (SAR) is an international network of universities and individuals who work together to harbour threatened academics, avert attacks and safeguard academic freedom and related values. Uppsala University has been a member of SAR for some time, and earlier this month, SAR – Sweden was launched at a seminar in Gothenburg. So far, the network consists of 11 seats of learning, but more will follow.

Ola Larsmo of PEN gave an appreciated lecture where he related his experiences as a writer-in-residence. He praised Uppsala University for harbouring a blogger from Bangladesh facing death threats. Amidst increasing global unrest, with difficult conflicts that threaten to encroach upon freedom of speech and academic autonomy, these questions are made all the more important. One way of shouldering our responsibility is to actively participate in SAR, but also to cooperate with PEN and other like-minded organisations. 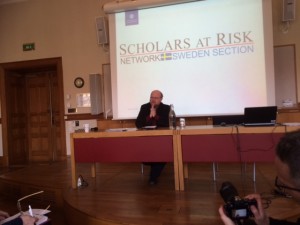