On my flight home, I tried to summarize my impressions of a few intense and rewarding days in Korea. Yesterday (Tuesday) marked the occasion of the seventh collaborative symposium with Hallym University, this time on the theme of ‘Current status and future perspective of immunotherapy for malignant diseases’. Kjell Öberg opened the proceedings with a lecture outlining the topic: Current concepts in diagnosis and treatment of neuroendocrine tumours. Kjell has been to all seven symposiums, alternately held in Uppsala and Seoul. The first symposium in 2008 was initiated by my predecessor Anders Hallberg and its legacy has been an increasingly deepened relationship between our two universities over the years. Joining us for the trip were Magnus Essand, Anna Dimberg, Alex Karlsson-Parra and Gustav Ullenhag, who all held well-received lectures before a very attentive and appreciative audience. Next time, we’ll see each other at Uppsala University for the eight annual symposium. 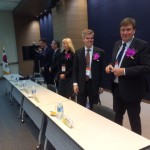 The Korea trip had been deliberately scheduled so as to allow me to participate in the OECD Ministerial Meeting Daejeon 2015 World Science & Technology Forum as an invited speaker this Monday. There, I gave a presentation entitled ‘Innovation and research – a local perspective on global challenges’ during a session on the theme: Global Cooperation, Research For All. Sweden is renowned for its creativity and its many innovators. A week or so ago, our Alumnus of the Year Niklas Zennström stated that Sweden is the world’s greatest country for entrepreneurs right now. I tried to showcase a few examples of how Uppsala University contributes to this through our AIMdays, student participation, KIC:s, and our global collaborations which retain a strong degree of local ties.

South Korea has made enormous strides in a relatively short period of time. The transition to higher education is far greater than ours, upwards of 70-80 percent, while the corresponding figures for Sweden are about 40-45 percent. There is still work to be done in gender equality, as few women hold leadership roles in South Korea. Now, the country faces large challenges, with a rapidly ageing population and uncertain economic prospects, as South Korea relies heavily on exports to China.

As I’ve fallen a bit behind with my blogging, I’ll simply touch on a few things from last week in this post.

Last week, we held domain-focused dialogues with all three Disciplinary Domains. It’s part of standard procedure nowadays to hold dialogues in both autumn and spring with the heads of the Disciplinary Domains. The vice-rectors spoke of overall progress and challenges. We discussed how to face them together. We also received input on which questions the Domain wants the University to bring to the attention of the government in the budget proposal for 2017-2019. This also became the start of a discussion for the VP (verksamhetsplan) of the University for 2017.

Last Monday, the Management Council spent the entire morning at a workshop on fundraising. We still have much to learn and room to grow in this area, that much was clear after our trip to the US recently. Our alumni association needs to be expanded as it is a cornerstone of this business, but our work on collaborations and external relations also need a general overhaul to accommodate more ambitious fundraising.

In the afternoon, I received a guided tour of the Munken Block, where the Faculty of Law has moved into the premises. It was a delight to meet with all the happy law students, many of whom were simply gushing about the new study spots. My sincere thanks to Margareta Brattström for an enjoyable tour!

As Vice-Chancellor, meeting with our students is always a joy. Last Wednesday, I met with our chemists at the Ångström Laboratory. For the second year in a row, I had been graciously invited there to talk about my career path from chemist to Vice-Chancellor.

On the following day, the Diplomatic Forum took place, where Chancellor Harriet Wallberg, (UKÄ), Sven Stavström (VR) and I had the honour of presenting education and research in Sweden to an audience of diplomats. A good opportunity to promote our fine University to an international audience. Lena Wallensteen hosts these seminars for diplomats stationed in Sweden.

The week was topped off in suitably grand style with the staff party at Uppsala Concert & Congress (UKK), which brought together more than 600 staff members. This year, the festivities had been relocated from the Royal Castle to UKK and from November to October, as well as rebranded a staff party instead of a November party. As a result, we can fit more people in the same hall, and there’s no risk of the floor giving out as everyone jumps along to the music. We’ve managed to shake the floor of the former Hall of State pretty good these last few years. With a stable floor and room for everyone, Friday’s party was a hit, to my mind. 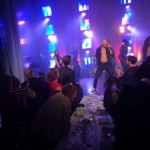 There, I managed to hit upon a few of last week’s highlights as well. Now, following the return trip from South Korea, the Gender Equality Conference awaits, including a visit from the Minister for Higher Education and Research, Helene Hellmark Knutsson.