Inauguration of professors and the Anders Wall lecture

On 14 November, 25 new professors were installed in office. We had a solemn ceremony in the Grand Auditorium of the University Main Building, followed by a fine banquet at Uppsala Castle. All the professors gave brief lectures in the course of three days, attended as usual by many people who were eager to hear what they had to say.

In conjunction with the Inauguration, we paid tribute to this year’s recipients of the Distinguished Teaching Awards for 2014 and also the winner of the innovation prize known as Hjärnäpplet (‘the Brain Apple’). 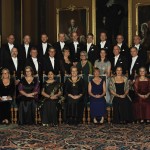 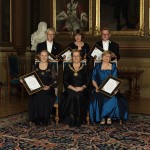 Once again, congratulations to all the professors and prize-winners — we are impressed!

We have also had the 2014 Anders Wall Lecture in the Grand Auditorium, on 19 November. This was attended by students and business leaders, along with others who were curious and wanted to experience inspiring lectures, musical entertainment and the award of Student of the Year, which went to Vanja Eriksson: congratulations!