Today, the Nobel laureates in medicine and chemistry visited Uppsala University. The medicine laureates, Thomas Sudhof, Randy Schekman and James Rothman, held well-attended lectures at the Biomedical Centre (BMC), while two of the chemistry laureates, Arieh Warshel and Michael Levitt, lectured in the university auditorium, dressed in red university ties which they received during their previous visit (see picture below). Lars Peter Hansen, one of the receivers of the prize in economic science, was sadly forced to cancel due to illness.

The laureates met Eva before the lectures, and they also had time for a lunch at Uppsala Castle before it was time to go back to Stockholm for the rest of the Nobel programme.

This year’s winner of the Nobel Peace Prize, the organization OPCW, was represented by Attila Zimonyi, head of strategy at the OPCW. He is on a visit to Uppsala due to the Conference Henri Lafontaine, a conference which is organized by Uppsala University and Wallonia Brussels International.
There is a long-standing tradition of inviting Nobel laureates to Uppsala in connection with the Nobel festivities in Stockholm, and it is gratifying that they are able to come here and both meet and inspire our students and researchers. 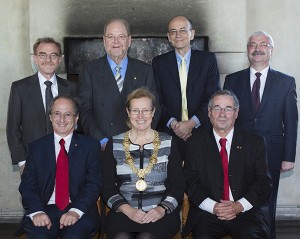