The Campus Gotland sign is unveiled at the opening ceremony on 1 July 2013.

The five year that have passed since then have been full of very intensive, successful and sometimes challenging work. Uppsala University has great ambitions for its education and research activities on Gotland.

The University’s main goal since 2013 has been to increase the number of students and teachers on the Visby campus. Several new Bachelor’s and Master’s programmes have been started and we have increased the number of full-time equivalent students on campus from around 700 to approximately 1,100. This autumn, we will be launching several more new programmes and we expect to reach our target of 1,500 full-time equivalent students on campus by the 2021–2022 academic year. The following figures help fill out the picture of what has happened over the past five years:

Needless to say, we are very happy and proud that our progress has been so successful. University departments and faculties with activities in Visby have been very serious and ambitious in their development efforts. Among other achievements, the University’s first international Bachelor’s programmes have started at Campus Gotland – four of them in all.

The development of Campus Gotland has been driven by staff in Uppsala as well as on Gotland. It has often been hard work, it has often demanded time – but that makes it all the more satisfying to note the excellent results.

But we are not going to rest on our laurels.

In September 2017, the University Board adopted a new Programme for Campus Gotland. The programme formulates goals that call for a continued increase in the number of students, as well as a long-term drive to strengthen research. In addition, the programme describes the particularly favourable conditions for assembling activities with a sustainable development focus, and sets out a vision of a Campus Gotland characterised by multi- and interdisciplinarity, regional collaboration and increased internationalisation.

The Planning Council – an advisory body supporting the Vice-Chancellor and faculties in issues relating to the development of Campus Gotland – has been working over the past year to identify a number of research areas considered capable of strengthening the research environment at Campus Gotland. Some of the areas under discussion are digital innovation, energy transition, sustainable tourism and hospitality, children’s health and cultural heritage.

The Planning Council has also given a working group the task of drafting a proposal for the establishment of a thematic doctoral environment.

The Swedish International Centre of Education for Sustainable Development (SWEDESD) has been given the special task of developing an ESD Learning Lab, which is intended to initiate and facilitate activities for students, teachers and researchers focusing on sustainable development issues. 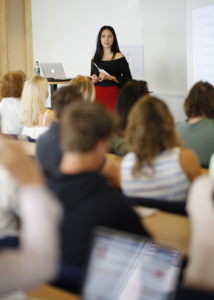 The spring semester ended with a new event: Campus Gotland PoP. During the two-day event, around 100 students gave popular scientific presentations on their degree projects. The general public and the University’s many different partners were invited and the event really showcased the diversity and quality that distinguish our educational programmes. 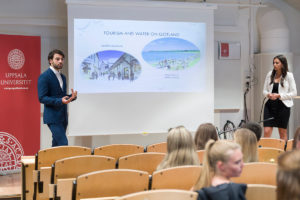 Mohammed Majid and Viviana Mora – students in the Master’s Programme in Sustainable Management – present their project during Campus Gotland PoP.

Another inspiring event that took place on 4–6 June was Gotland Game Conference – GGC. A much-appreciated conference at which students in Game Design have a chance to present all the games they have created in the course of their studies. The conference attracts industry representatives, international visitors from various universities and not least the people of Gotland.  GGC really illustrates the uniqueness and creativity of activities at the Department of Game Design. 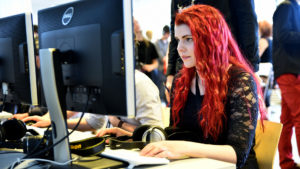 The Student Welfare President of Rindi Student Union, Matilda Drejer, presents the Teacher of the Year Award to Gunnar Dahlin of the Department of Engineering Sciences.

The degree ceremony brought the spring semester to an end, and after a few weeks at a slightly more relaxed pace, we are now gearing up for Almedalen Week. Uppsala University is organising numerous seminars during this year’s Almendalen Week. In addition to the University’s own events, many members of staff are participating in other seminars, panels and debates.

On Tuesday 3 July, the University will be holding its annual reception, which will be particularly ambitious and grand this year as we celebrate the fifth anniversary of Campus Gotland.

In conclusion, I would like to thank all the members of staff – in both Uppsala and Visby – who have made Campus Gotland’s successful development possible.

Olle Jansson
Adviser to the Vice-Chancellor on Campus Gotland