University Board meeting at Krusenberg

On Tuesday afternoon, Deputy Vice-Chancellor Anders Malmberg presented the results of the Quality and Renewal 2017 (Q&R17) project. Vice-Rectors Johan Tysk and Torsten Svensson and Deputy Vice-Rector Mats Larhed spoke about how their disciplinary domains will proceed with the recommendations that have come out of the project. The University Board made many positive comments on the work that has been done, the planned follow-up process and how the University works on quality assurance and development issues in general. The members will be interested to follow how the results are taken forward and translated into action, in both the short term and the longer term.

These issues inspired a lively discussion, which also took up the question of how to organise the ongoing process of revising the rules of procedure. Against the backdrop of the discussions on Tuesday, the University Board decided during the second day’s session to appoint a group to continue work on the new rules of procedure, on the basis of the task force’s proposal. The group consists of the Board’s Chair Gudmund Hernes, Vice-Chancellor Eva Åkesson, Shirin Ahlbäck-Öberg (representing the teaching staff), Gunnar Svedberg (external) and Rozbe Bozorgi (student). University Director Katarina Bjelke will provide administrative support.

A traditional feature of the University Board’s November meeting is a presentation on the year’s Nobel Prizes. This is greatly appreciated. Many thanks to Ulf Danielsson, Katarina Edwards, Ashleigh Harris, Mikael Elinder and Dan Larhammar for explaining the prizes in such an inspiring way. 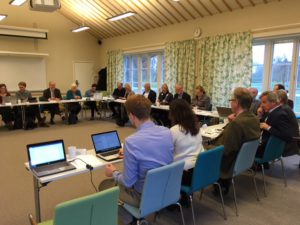 On Wednesday morning, the University Board held its regular meeting. This began with a report from the Vice-Chancellor on developments at the University since the previous meeting. Two issues that were addressed in particular were the University’s procedures for dealing with sexual harassment and the media debate that followed the news about an exhibition in Enköping on textile archaeology research.

Another point on the agenda concerned the new Ångström Laboratory, where the Vice-Chancellor had requested a consultation with the University Board before taking a decision on implementation. The University Board has received information about this project on several previous occasions. It is a major and important project that has been discussed and prepared for a long time and is now ready for a decision, following approval of the proposal by a large majority by the board of the Disciplinary Domain of Science and Technology. Critical views have been voiced, as reported in the newspaper Upsala Nya Tidning.

Among other decisions taken, the University Board elected Elisabeth Dahlin its new vice-chair. The University Board also approved the establishment of the Centre for Integrated Research on Culture and Society (CIRCUS), a new interdisciplinary research initiative in the Disciplinary Domain of Humanities and Social Sciences.