I (Eva Åkesson) have just returned home from Dartmouth and a meeting of the Executive Board of the Matariki Network of Universities. Matariki – the word is the Maori name for the Seven Sisters star cluster (the Pleiades), chosen to reflect the seven founding members of the network – has existed for seven years and is beginning to take more definite shape. We are engaged in the Global Citizen Program and various research themes, Uppsala University is lead university for the peace and conflict theme. Several years ago we established Matariki Fellows, a programme that enables our staff to spend some time at one of our sister universities, and this scheme will now be expanded to include doctoral students. I think this is a good thing, the need for better opportunities for doctoral students to spend time abroad is one of the issues that has emerged from the Quality and Renewal 2017 (Q&R17) project.

I particularly appreciated the opportunity to hear about what’s going on at the other universities and the challenges they see ahead. This gives us a quick analysis of international developments around the world. A few samples: We heard from the University of Otago that New Zealand is going to abolish tuition fees in the New Year – free fees. There was great interest in how the Swedish funding model works, with its funding caps and price tags. The University of Western Australia has undergone major reorganisation and introduced a new budget model that has taken a lot of time and effort. At the national level, the threat of funding cutbacks looms and discussions are in progress about international students. Tübingen University is in the midst of the selection procedure in the German Excellence Initiative and is happy to have done well in the first round. Durham University – which the Management Council recently visited – has a new strategy for the next 10 years that is attracting a lot of attention. At the national level the big issues are REF, TEF and KEF, the evaluations of research, education and collaboration. And at the international level there’s Brexit, of course. Student fees are also in focus here, the maximum fee is currently £9,000. Across the Atlantic, Queen’s University in Canada has undertaken a similar research evaluation to Uppsala University. The host university, Dartmouth College in the United States, raised the issue of mental ill health among students, which became a recurrent theme in our conversations and is noted at all the universities. The President of Dartmouth, Phil Hanlon, who is the present Chair of Matariki, raised the issues of politics and Trump, and the consequences for education and research. Regarding news from Uppsala, I told them about Q&R17, the ongoing government inquiries at national level, infrastructure issues, and the increasing number of allegations of research misconduct. To sum up, we agreed that politics is having an increasingly obvious impact on our universities, we have many challenges in common and we can learn from one another in different ways, which is one of the purposes of the network. 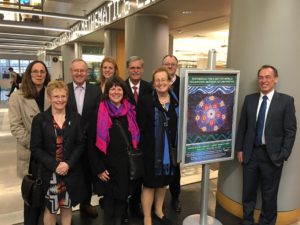 After ending our meeting yesterday, Tuesday, we travelled to Boston for a joint alumni event. This is the third such occasion, the previous alumni events were in Auckland and Beijing. The presentation to our alumni focused on Matariki and our global engagement. During the previous meeting, we had gone over our partnerships and involvement in Africa, which make up an extensive and impressive list. We are going to investigate whether there is potential for further cooperation in that area as well.

Does the network make any difference? One way of measuring this is joint publications, and within Matariki these have increased by close to 150% in 2011–2016, compared with the previous period 2005–2011. A quibbler might object that the total number of publications has also increased during this period and that’s true. That increase is 40%, so these measurements show clearly that the network makes a difference. But there are also qualitative measures and values that shouldn’t be forgotten, we often act as critical friends, provide support and advice and exchange experiences with one another in a spirit of trust that is mutually appreciated. We university heads will next meet in this constellation in 2019, in Tübingen. In between, we speak via Skype, video or telephone. Anna Ledin is contact person for Matariki at Uppsala University and if you would like to know more or have any questions about anything, you can contact her at anna.ledin@uadm.uu.se.