With STUNS in Berlin

On 4–6 September the Foundation for Collaboration between the Universities in Uppsala, Business, and the Public Sector (STUNS) made a study visit to Berlin. The delegation was made up of 18 people from the STUNS Governing Board and Planning Group, led by County Governor Göran Enander. Uppsala University was represented by Deputy Vice-Chancellor Anders Malmberg, blogging here, along with University Director Katarina Bjelke and Jenny Nordquist, acting head of Uppsala University Innovation. 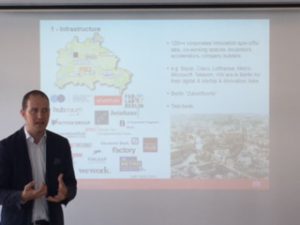 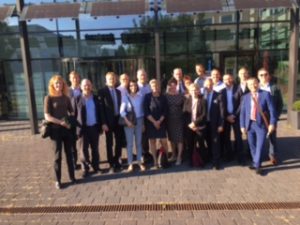 The programme focused on three topics: how a city like Berlin goes about marketing itself, what is being done to encourage start-ups, and how the transition to renewable energy is progressing. As is well known, Germany has committed itself to achieving the climate objectives while fast-tracking its nuclear power phase-out.

On Monday afternoon we visited the Brain City Berlin campaign hosted by Berlin Partner, the city’s organisation for trade development and promotion, which engages in highly successful ‘location marketing’ to attract businesses and research institutes. We also managed to fit in a regular board meeting before dinner with Sweden’s ambassador Per Thöresson at the residence, where we were briefed on the situation in Germany ahead of the election at the end of the month and in relation to Brexit, etc.

On Tuesday we saw a number of examples of what Berlin is doing to encourage and attract start-ups. We visited Ahoy Berlin, which is one of more than 120 innovation labs, incubators and co-working spaces in Berlin today. While there, we saw a hilarious YouTube video of the best sales pitch anyone has made for Berlin as a global start-up centre. Watch the video here!

Tuesday was a very busy day. We also visited Technische Universität Berlin (TU Berlin), where the Centre for Entrepreneurship presents an interesting combination of entrepreneurship research and education and incubator activities. And then we carried on to Adlershof, an enormous business and science park venture in the old East Berlin. The Humboldt University has placed six departments there, numerous companies have established themselves and student housing is being built on a large scale. 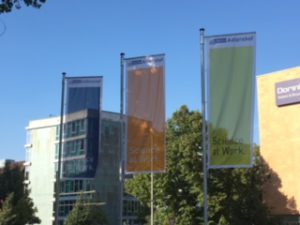 Before travelling home on Wednesday afternoon we had time to visit the EUREF Campus, where a private entrepreneur and property owner is developing what they describe as a future home base for companies and research institutes in the fields of energy, sustainability and mobility. Here, start-ups exist side-by-side with medium-sized companies, R&D divisions from major companies and researchers from TU Berlin. We received a detailed introduction to Mobility2Grid (pdf) (a research project cum test and reference district for sustainable urban development, with a focus on decentralised electricity and heating supply and transport), and the company Green City Solutions (intelligent moss-covered air filters for cities). 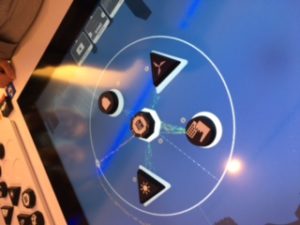 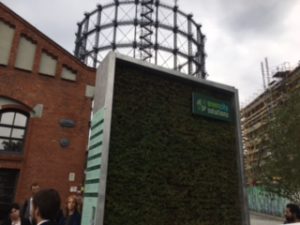 During our two busy days in Berlin, we benefited from the expert guidance of Anne Geitmann from the German–Swedish chamber of commerce, who also helped put the programme together. Many thanks to all the organisers and companions on the trip for an instructive and enjoyable visit.