The Guild Forum and GA in Brussels

The Guild of European Research-Intensive Universities, or the Guild, as we often call it, is a European university network that was established a year ago to give the university sector a stronger voice in Europe. At the end of the week, some of us from Uppsala University participated in the Guild Forum: Universities, Research and the Future of Europe in Brussels. There were panel debates with interesting discussions on challenges and opportunities for the next framework programme (FP9) – what approach should be taken to excellence and wider participation respectively, what are the major future challenges for Europe, can the programmes be simplified, and can we be more open to the world? I (Eva) took part in a panel debate on Research, Innovation and the Citizen: The Added Value of the EU. 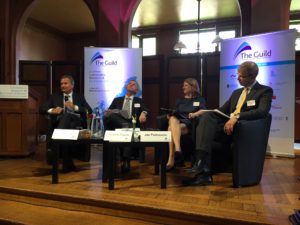 In the Guild Workshops section, I chose the topic: Challenges for Europe’s sustainable development: translating the UN’s sustainable development goals into priorities for European research. Creative and inspiring discussions that encouraged all participants to think about these issues in new ways. The announcement by the US President later that evening that the United States was leaving the climate agreement gave an extra edge to our discussions. 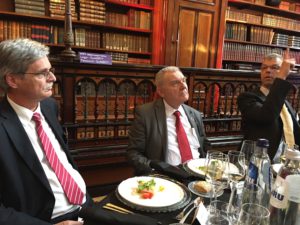 The next day it was time for the General Assembly, the meeting of university heads. First we had a visit from Kurt Vandenberghe, who works at the European Commission as Director for Policy Development and Coordination at DG Research and Innovation. We had an open and productive discussion that helped the network move forward in our work in Brussels. During the meeting, the University of Bern was elected as a member, so now there are nineteen universities in the Guild. We approved a position paper on FP9. Many bodies get actively involved and submit these types of documents – the Association of Swedish Higher Education has also formulated positions ahead of the next framework programme. 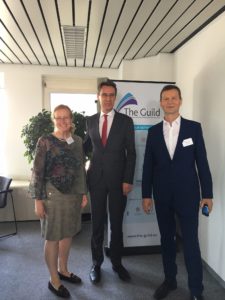 A new Board of Directors was elected for the next three-year period and I was entrusted with the position of Vice-Chair. The new Chair is Vincent Blondel, Rector of the University of Louvain, who succeeds Ole Petter Ottersen (University of Oslo). Ole Petter resigned from the post as he is taking over as Vice-Chancellor of Karolinska Institutet on 1 August. Now it feels as if the Guild is really taking off, we have real commitment among the members and a well-organised office in place in Brussels. It is up to us in Uppsala University how we want to use all the opportunities that this network gives us in the European arena in future. 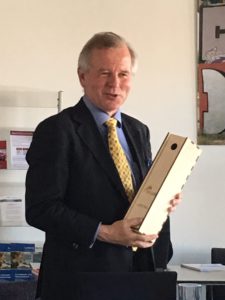