Congratulations to Ghent University on its bicentenary! 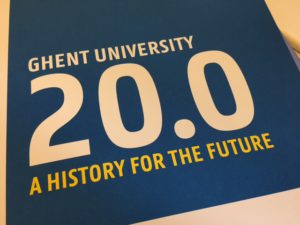 I (Eva) visited Ghent University at the end of the week to join in the celebration of their bicentenary. Vice-Chancellors from their partner universities were invited to a conference entitled “Shaping our Common Future: Universities in a Global Society”. There were three topics:

We had lively discussions on the present and future role of universities. The issue of rankings came up – their increasing importance and the risk of being controlled by the various rankings. The issue of digitalisation and a provocative opening speaker who asserted that the universities have had their day got us talking. But we managed to reassure one another and convince ourselves that the universities do indeed have a future. I participated in the panel on internationalisation. Eva Egron-Polak, Secretary-General of the International Association of Universities, spoke first and provided a good general picture of the situation, including the risks associated with internationalisation. 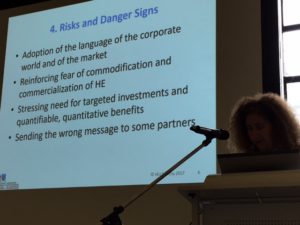 I tried to emphasise the variety and diversity involved in internationalisation, which is now far more than just student mobility. Various types of integrated internationalisation are increasingly common, such as joint programmes, joint degrees, a range of sandwich models in doctoral education, co-tutelle arrangements, etc. We have major, complex cooperative projects in the Knowledge and Innovation Communities, in Nanjing and the Hanoi office, for example. Higher education institutions in Sweden have got better at joint international collaboration; a few examples of this are the Swedish Academic Collaboration Forum (SACF), Mirai (Japan) and the upcoming project in South Africa that we hope the Swedish Foundation for International Cooperation in Research and Higher Education (STINT) will support. Although the heading for the panel pointed to increased competition, I underlined the need for increased international collaboration these days – sceince diplomacy may assume an increasingly important role in future and universities around the world have a responsibility to contribute to a better world – which is something we can best do together.

Now the university management is on its way to the United States where we will spend a week visiting UCLA, Berkeley, Stanford and the University of Washington. In Los Angeles, San Fransisco and Seattle we will take the opportunity to hold events for alumni and friends in the evenings. Upcoming blog posts will have more news about the trip.