Last week I had the privilege of listening to two really fantastic lectures. The first was by Trita Parsi, 2016 Alumnus of the Year, who spoke on the subject: “The US and Iran in the Trump Era – Back to the Warpath?” The United States and Iran have a long history of ambivalent relations and their governments have treated one another as enemies for decades. However, the historic agreement in 2015 appeared to be the beginning of the end of their enmity. The agreement imposed severe limitations on Iran’s nuclear energy programme in return for lifting international sanctions and increased dialogue between the two nations. Now President Trump is threatening to tear up the agreement with Iran. What will be the consequences for relations between the US and Iran? If you missed the lecture, you can see it here. 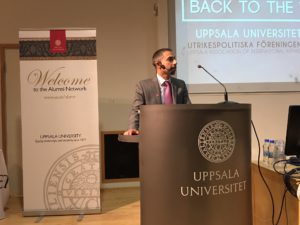 The other lecture was by Professor Emeritus Christopher R. Browning from the University of North Carolina at Chapel Hill, who gave the fifteenth annual lecture in memory of Hugo Valentin. Professor Browning spoke on: “Surviving Slave Labour: The Camp Complex of the Starachowice Factories.” His story moved us all deeply.

These were two of last week’s public lectures. Every week we offer public events that you can attend. My recommendation is to check the events calendar – Uppsala University has a steady stream of dialogues, seminars, debates and conferences with visiting speakers from all over the world.