Brexit – what will be the impact on research and higher education in the UK and Sweden?

To begin with, Sophia Tannergård (Growth Analysis) presented findings from her new report “Brexit and the universities – an opportunity for Sweden’s increased cooperation”:

– How do people at British higher education institutions see Brexit?

– How are they preparing for life outside the EU?

– What barriers and opportunities will Brexit result in for Swedish and British higher education institutions?

After that, Lesley Wilson, Secretary General of the European University Association, brought up a number of questions relating to Europe, Brexit and Trump. I participated to shed light on problems associated with Brexit from the perspective of higher education institutions, and representatives from the Swedish Research Council and the Swedish Council for Higher Education contributed views from their organisations’ perspectives. 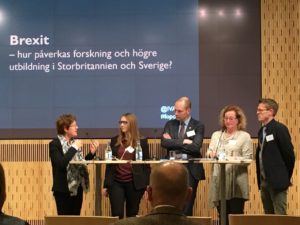 First and foremost, we can say this: we do not yet know what Brexit will mean in practice – there is great uncertainty. There is a great deal of interest among students in visiting the UK. We currently have 31 active agreements with higher education institutions in the UK. Moreover, it is the most popular study destination for Swedish students in the Erasmus Programme. Research collaboration is common, and we see that joint publications with researchers in the UK lead to more citations and enhanced impact. Several times during the seminar, different speakers emphasised the important role played by the UK in research and education. We have a long tradition of cooperation and Sweden and the UK have often been partners in EU contexts. We often have similar views – this has been particularly significant with regard to the more administrative aspects of the EU, in the Commission and the Parliament, and in the working groups and committees that prepare various types of issues and input, such as Coreper (the Permanent Representatives Committee). Many of us are concerned about a significant research country like the UK leaving the EU. Will research issues be less important in the EU in future because of this?

At the same time we can affirm that science and scholarship are international by nature, and will remain so irrespective of the membership of the European Union. It is highly likely that research collaboration will continue, though without EU funding. Not all scholarly exchange with the UK or with other non-EU countries is funded by the EU. But it will require an effort. One obvious risk is that the budget for the next research programme is likely to shrink, as there is no political will at present to raise membership contributions to compensate for the loss of the UK contribution. Uppsala University has many agreements that will continue in effect and some that will need to be rewritten. Presumably we will have to reformulate Erasmus agreements as ordinary bilateral agreements.

Here in Uppsala we have seen more UK actors seeking contact with us since the Brexit vote; vice-chancellors have been in touch with the University and the International Office seeking assurances of continued cooperation. We have had inquiries about strategic partnerships and British higher education institutions are applying for membership of European networks. This Friday, for example, the Vice-Chancellor of the University of Liverpool is visiting us. It is important for us – and for British higher education institutions – that our collaboration remains strong. This is in everyone’s interests.

It can also be noted that competition has arisen as to which country will take over the European Medicines Agency (EMA), which is currently based in the UK. So far Sweden, Finland, Denmark, Italy and Spain have declared their interest.

Lesley Wilson (EUA) raised the question of how political, or how neutral, universities should be. My answer to that question was that when facts and knowledge are challenged, it is our responsibility to be the critical and independent voice – regardless of whether or not this is considered to be political. As I have written in this blog before: The best way to meet the trends we are seeing today – political uncertainty, fact resistance and contempt for knowledge – is to strengthen the independence of the universities, defend critical thinking and provide conditions for society to move forward on the basis of knowledge.

I think it was good that the Royal Swedish Academy of Engineering Sciences organised this seminar, even if there is great uncertainty at the present time, as no general discussion or impact analysis has occurred in the sector. However, the Association of Swedish Higher Education plans to do something this autumn.