Groningen, Göttingen and Zürich are the stops on my itinerary from Friday to Monday. On Friday and Saturday, a delegation of about ten people from Uppsala University was in Groningen for the ninth meeting of university heads in the U4 network. U4 is a relatively small network of universities consisting of Uppsala, Groningen, Ghent and Göttingen. We collaborate in four clusters (lead institution in parentheses): 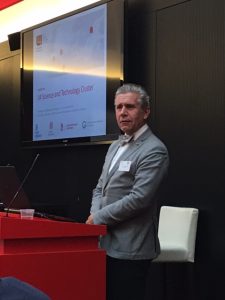 Institutional management is a further area of cooperation. Several welcome initiatives are in progress, for example a leadership programme now ending its second round, with a third round due to begin in autumn 2017. We have successfully collaborated in many EU projects, particularly Erasmus mobility projects in Africa and Asia. Topics discussed during the meeting included double/joint degrees for PhD students, summer schools, and other ways of collaborating on doctoral education. Various peer review exercises have been carried out. One of these, on sustainability, was reported on at the meeting. Green Offices is something Uppsala University has been inspired by and would like to try out in future. Two new areas we would like to work on together in future are procedures for post docs and career paths for young academics. In U4 we highlight good practice and learn from one another. Overall I was impressed by all the clusters this time and by the way in which collaboration is now yielding results. It takes a few years to get a network to function and we should remember this now when we are soon to begin working in the Guild, in which all four U4 universities will participate. 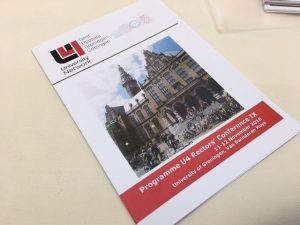 On Sunday I took the opportunity to visit Göttingen, where the President, Ulrike Beisiegel, briefed me on their preparations for the German excellence initiative and showed me the campus, including visits to some of their museums. I carried on south by train on Sunday afternoon. And there are delayed and cancelled trains in Germany too. Complaints about poor maintenance were heard when the delayed train came to a standstill halfway and we had to crowd into an already packed train in Frankfurt. Now I’m sitting on my way to Zürich several hours later than planned but hope to reach my destination before midnight. On Monday morning I will attend a conference on “Women and Leadership in Academia” and will try to say something clever in the panel debate I will be participating in.

On Tuesday morning I’ll be back in Uppsala and I look forward to the inauguration of 45 new professors in the cathedral on Friday. Don’t miss their lectures this week!