Each year, King Carl Gustaf makes two trips organised by IVA (the Royal Swedish Academy of Engineering Sciences) – one abroad and one in Sweden. This year the destinations were Japan and Gotland, and the Vice-Chancellor had the pleasure of participating in both. Unfortunately the King couldn’t come because of back problems so the trip to Gotland had to go ahead without him. The delegation consisted of around 20 representatives from the public sector, the business sector and the University. It was a busy programme, starting out at Campus Gotland, where researchers, teachers and students gave presentations on sustainable tourism, cultural heritage, wind power and game design. Next came Science Park and a lively presentation by the IT company Pickit, lunch at the craft centre Mejeriet and then on to the agricultural centre Gotland Grönt Centrum, where we heard about the Moving Floor concept (self-cleaning floors in animal facilities) and saw a lamb-shearing demonstration. We had time for a short visit to Wisby breweries before dinner at the Residence, hosted by County Governor Cecilia Schelin Seidegård. On day two, the destinations were Cementa AB, Slite and Bungenäs, with a lunchtime presentation of BRS Networks AB. Major-General Karl Engelbrektson, the Swedish Army Chief of Staff, gave a presentation on the security situation during the trip back to Visby, where the visit concluded at the Swedish National Heritage Board. Uppsala University and Campus Gotland in particular came up in many presentations and conversations at most of the venues. It was easy to be a very proud Vice-Chancellor. 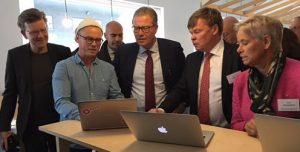 At the same time as the Gotland trip, the third Uppsala Health Summit was in progress, on this occasion in the historic and surprisingly functional conference premises at Uppsala Castle. The theme on this occasion was “Ending Childhood Obesity – Actions through Health and Food Equity”. Around 180 participants were offered a well-planned and varied programme including plenary lectures, workshops and regular aerobics sessions with instructors and children from Friskis&Svettis. Uppsala Health Summit is well on the way to being the well-established international forum the initiative aimed for. Eight partners now stand behind Uppsala Health Summit – Uppsala University, the Swedish University of Agricultrual Sciences, Uppsala Municipality, Uppsala County Council, World Class Uppsala, the National Veterinary Institute, the Medical Products Agency and the National Food Agency. Uppsala University is the host organisation and Deputy Vice-Chancellor Anders Malmberg chairs the steering group. The project team, headed by Madeleine Neil, does a fantastic job along with all the hard-working members of the annual programme committee, led this time by Professor Richard Landberg. 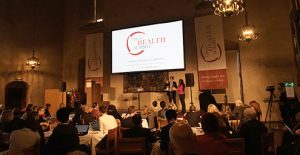 Otherwise, the week began with a department visit. This time we visited the Department of Modern Languages. We would like to say thank you and to emphasise how important these visits are for us. Learning about day-to-day activities at the departments, reasons for satisfaction and causes of concern, enables us to carry out our management responsibilities better.

On Friday evening it was time for the staff party at UKK – more than 600 people were there having a good time together. That’s about 10% of the staff, who enjoyed a festive evening with good food, entertainment (Bröderna Rongedal) and each other’s pleasant company. Thank you to all the organisers, much appreciated. 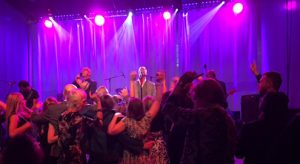 On Saturday Uppsala received a visit from the foreign minister of El Salvador, Hugo Martínez, who was accompanied by his country’s Stockholm ambassador Anita Escher Echeverría. Anders Malmberg and Municipality President Carl Lindberg hosted a lunch at the Walmstedt House, before the minister moved on to open a Salvadoran film festival at Slottsbiografen. 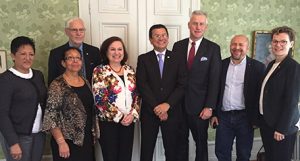