‘Learning Together for Change’ is an ongoing conference in Arusha, Tanzania, at the Nelson Mandela African Institution of Science and Technology. Eva is attending the conference together with Daniel Stattin and Peter Sundin from Uppsala. 15 Swedish universities are represented, and there are participants from 14 different African countries, in total some 200 participants form three days. The conference is an initiative of the Association of Swedish Higher Education (SUHF) and the International Association of Universities (IAU) and is one way of contributing to UNESCO’s project ‘Education for all’. During the conference we discuss how we can work towards education being a right for all, with particular focus on teacher education. The official opening was grand, with Eva welcoming everyone on behalf of the SUHF. The Vice President of Tanzania, Mohamed Ghariv Bilal and the Minister for Communication, Science and Technology, Makame Mbarwa, both held opening talks. Sweden’s ambassador in Tanzania, Lennart Hjelmåker, gave an appreciated talk. This was followed by intense workshops in the following days, interesting discussions and exchange of ideas between participants. We learn a lot together. The conclusions from the conference are documented and will be forwarded to the UNESCO World Education Forum in Incheon, Korea. 19–22 May 2015. 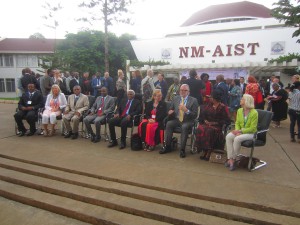 The European University Association (EUA) took the initiative to hold a moment of silence at Europe’s universities on Monday 27 April, 12:00 noon. The moment of silence was held to condemn all forms of violence against schools and universities, and to honour the victims of the terror attack on Garissa University College in Kenya, 2 April, when 147 people were killed and 79 injured.

The EUA emphasizes that all forms of violence or attacks on educational institutions go against the universities’ fundamental values of freedom of thought and speech, tolerance and autonomy. It undermines young people’s ambitions and basic rights to education and being able to contribute to the development in their country, the greater society and the world. The EUA therefore encouraged all European universities as well as in other parts of the world to unite in condemning all forms of violence against education.

A moment of silence was held yesterday in several places at Uppsala University, as well as at the conference here in Arusha.