The Swedish Academic Collaboration Forum (SACF) is an international cooperation project between six universities, namely Uppsala University, the Royal Institute of Technology KTH, Chalmers University of Technology, Lund University, Stockholm University and Linköping University. The goal of the project is to develop and strengthen existing research cooperation between researchers in Sweden and other parts of the world, and forge connections with business and industry. The project is funded by STINT, which we are grateful for. Together we will hold six ‘Excellence Seminars’, the first of which was held this week in Hanyang University in Seoul, Korea. Welcoming words were given by Urban Ahlin, speaker of the Swedish riksdag, and by Ambassador Lars Danielsson. I (Eva) gave an introductory keynote titled ‘Innovation and research – a local perspective on global challenges’. The first SACF seminar was a success with lively sessions and dedicated researchers. Representing Uppsala University were Kristina Edström, Mats Larhed, Marie Allen, Kersti Hermansson, Peter Lindblad and Börgvin Hjörvarsson, who all gave presentations in the sessions which were themed as follows:

All in all, this was a very successful start for the SACF and I would like to thank everyone who in different ways have contributed to the 2015 Korea – Sweden Excellence Seminar. Cooperating internationally is important and gives us much greater impact. Upcoming seminars will be held in Singapore and China in November 2015, followed by seminars in Brazil and Indonesia in 2016. The final meeting will be held in Stockholm. If you would like to know more about the SACF or take part in an upcoming seminar? Speak to Ulrica Ouline. 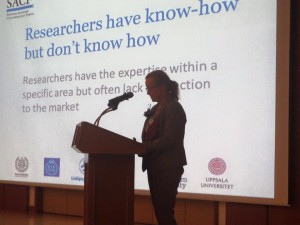 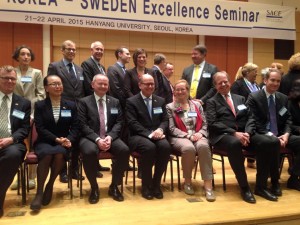 On Monday, some of us visited the Medical Center at Hallym University. Uppsala University has since several years back cooperated with Hallym University, on initiative of my predecessor Anders Hallberg. Among other things we organize alternating symposia together, the last one in Uppsala. The next meeting – the seventh of its kind – will be held in Korea. 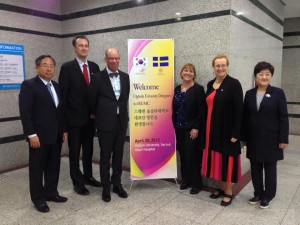 In connection with the 2015 Korea–Sweden Excellence Seminar, the Swedish Institute organized a combined alumni and pre-departure meeting for the participating Swedish universities. Some twenty Uppsala alumni came to the reception to mingle and share memories of Uppsala. It is always pleasing to see how our alumni truly are our ambassadors on location all over the world and I really encourage our teachers and employees to take the time to meet our alumni when travelling abroad. 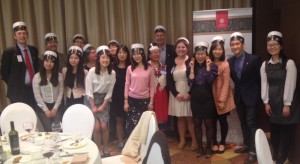