Yesterday was a very interesting day at work. In the morning, we discussed politics with Stefan Löfven, the leader of the Social Democratic party, Ardalan Shekarabi, Member of Parliament and Vivianne Macdisi, County Commissioner. They sought to discuss the university’s role in the knowledge region of Uppsala, how does the university spur innovations and new technologies in the sector of life sciences, and how do we collaborate with business and society? We raised questions about education, internationalization, resource allocation and evaluation methods, among other things. The time was limited, as it often is when many have much to say, and the meeting ended with the call to continue at a future meeting.

We then met the Indian ambassador Banashri Bose Harrison at the inauguration ceremony of a bust of Rabindranath Tagore at the English Park campus. Rabindranath Tagore won the Nobel Prize in Literature in 1913, and was the first non- European who was awarded the prize. During the afternoon there were three lectures about his life and his relationship with Sweden organized by the Forum for South Asian Studies at the Department of Linguistics and Philology.

The rest of the week has many things to offer, for example the Include-conference on Thursday and a visit by the university management from Lund University on Friday. An exciting and eventful week, just as it should be early in May! 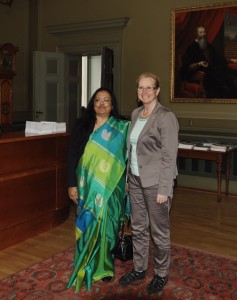