Visits from Brussels and Moldova

There are always a number of ongoing meetings of all sorts at our university. Today we had the EU Commissioner László Andor on a flying visit, invited by Joakim Palme at the Department of Political Science. Commissioner Andor, responsible for Employment, Social Affairs and Inclusion, has in the past year gone on the offensive against the growing social imbalances within the EU that followed the global financial crisis. He has launched a strategy for action that in different ways could strengthen the social dimension of the European Union.

His visit to Uppsala University began with a breakfast meeting with the Deputy Vice-Chancellor and a dozen researchers and students with an interest in EU affairs. After a brief tour of the Museum Gustanavium, Andor held a speech entitled ‘The Social Dimension of the Internal Market’.

Yesterday we had a visit from the President of the Moldovan Parliament, Igor Corman. He was here with a delegation of Members of Parliament at the invitation of the Speaker of the Swedish Parliament, Per Westerberg, and visited the Ångström Laboratory and Uppsala Innovation Center.

At Ångström, professor Kristina Edström presented our center for battery research, and showed our visitors the current research on lithium batteries and fuel cells. Professor Peter Lindblad presented the section of Biomimetics, and talked about our research on renewable energy. 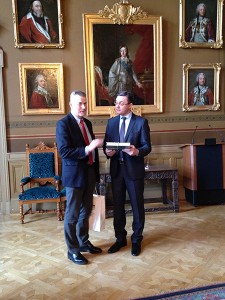 Peter Lindblad at the Ångström Laboratory.