The Vice-Chancellor’s Management Council started the week with a 24-hour visit to Helsinki. At Helsinki University we were taken on a tour that included, among other things, the entirely new library before sitting down to a morning meeting with the management there, headed by the newly installed Vice-Chancellor, Jukka Kola, and the new Chancellor, Thomas Wilhelmsson. After lunch our journey took us to nearby Esbo for a visit to Aalto University, where Vice-Chancellor Tuula Teeri greeted us with her management group.

At both universities, the discussion revolved around autonomy, governance, and management forms. Finland carried out a higher education reform in 2010, entailing that universities were given a more independent position vis-à-vis the government, and their modes of operation became less regulated. Helsinki University became a juridical entity of its own in the public sphere. Aalto University was established in 2010 through the merger of three Finnish higher-education institutions – the Helsinki School of Economics, the University of Art and Design, and the University of Technology – and became a foundation. Our discussions involved goals and strategies in general, internationalisation, and fundraising.

At both universities we had a chance to see examples of innovative learning environments. At Helsinki University part of the meeting was held in the “Think Corner”and at Aalto University we visited a so-called design factory. 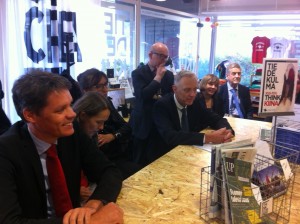 The “Think Corner” at Helsinki University